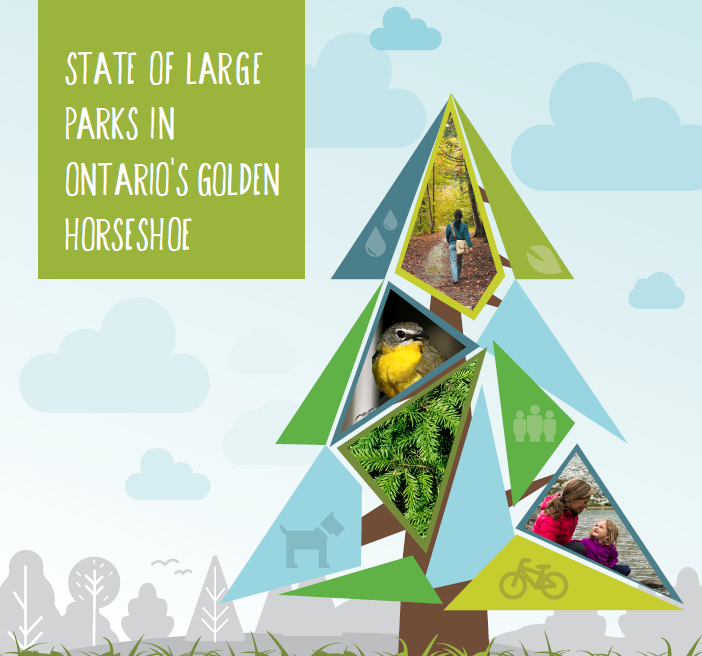 June 11, 2019 – Just as storm sewers and transit lines are vital components of regional infrastructure, so too are the large parks of Ontario’s Golden Horseshoe. That finding is one of many coming out of the first State of Large Parks in Ontario’s Golden Horseshoe report, released today by the Green Infrastructure Ontario (GIO) Coalition, in partnership with the Greenbelt Foundation, Credit Valley Conservation and Toronto and Region Conservation Authority.

The new report highlights the important role parks larger than 50 hectares play in supporting healthy communities in Southern Ontario. Currently, more than 54,000 hectares of parkland serve 7.4 million residents in the Golden Horseshoe. Large parks account for 50 percent of all parkland in the region. While parks of all sizes provide critical health and wellbeing benefits for communities, there are a variety of magnified benefits associated with large parks, such as a higher likelihood they will be used for physical activity, their ability to provide a nature experience, and their provision of cool microclimates during increasingly hot summers.

In the Golden Horseshoe, many large parks already face pressures from increased visitation. Population growth in the region will only exacerbate this issue.

“We’re thrilled to release this report, which compiles information from 56 local, regional, provincial and federal governments,” said Deborah Martin Downs, Chair, GIO Coalition. “Our analysis found that the Golden Horseshoe region would need nearly 15,000 hectares of new large parkland to maintain the current level of large park supply per person by 2041. That is more than a 50 percent increase.”

“Eighty percent of the Golden Horseshoe’s large parks are in the Greenbelt, providing green space, driving tourism, sequestering carbon and adding value as natural asset infrastructure for nine million residents of the broader region,” says Edward McDonnell, CEO of the Greenbelt Foundation. “The Greenbelt Foundation actively supports the protection and strategic expansion of these critical assets.”

Large parks in the Golden Horseshoe are a legacy of visionaries who understood the important role large parks play as green space for Ontarians. They are natural assets that protect communities from flooding and provide wildlife habitat, among other benefits. The GIO Coalition is calling on regional and provincial leaders to ensure there is concerted investment into strategic planning and funding of large parks in the Golden Horseshoe in order to support the health and well being of the region’s growing population.